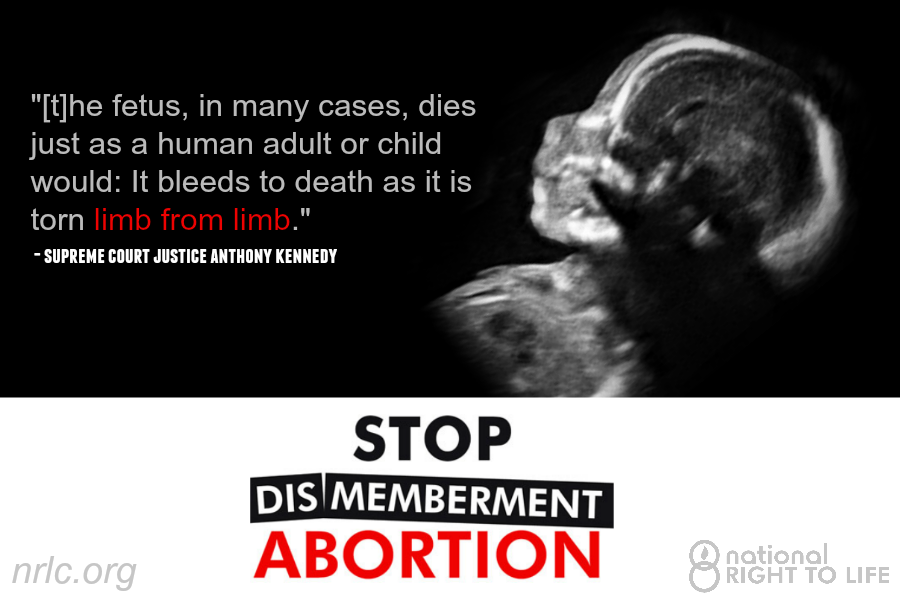 MRL received the following notice from National Right to Life:

This new law is based on model legislation drafted by National Right to Life.

It is the first of what we hope will be many state laws banning dismemberment abortions.

This law could have the power to transform the landscape of abortion policy in the United States.

And I want to ask you to help us pass it in more states!

I want to warn you that this next paragraph is graphic in its description of what a dismemberment abortion is.

In a dismemberment abortion, a forceps or similar instrument is used to twist and tear pieces of a living unborn baby from her body until the baby bleeds to death.

Many of these babies are developed enough to feel pain.

“Dismemberment abortion kills a baby by tearing her apart limb from limb,” said our director of State Legislation, Mary Spaulding Balch, J.D. “Before the first trimester ends, the unborn child has a beating heart, brain waves, and every organ system in place. Dismemberment abortions occur after the baby has reached these milestones.”

Even Justice Anthony Kennedy of the U.S. Supreme Court has written forcefully about the brutality of such abortions. The Unborn Child Protection from Dismemberment Abortion Act would ban them – and National Right to Life is leading the fight to pass the law wherever we can.

Oklahoma is expected to pass the ban soon, and it’s being considered elsewhere as well.

We learned in the debate over partial-birth abortion that when the American people are told about brutal methods of abortion like this, they recoil and want to see those abortions banned.

Those who have been with us since the fight over partial-birth abortion know that it helped transform the debate, moving many people – especially many young people who grew up at the height of the debate – to the pro-life side. The debate over protecting unborn babies from the barbarity of dismemberment abortions can have just as powerful an effect!

[Note: Here in Missouri a bill to ban dismemberment abortions has been introduced in the House of Representatives.]