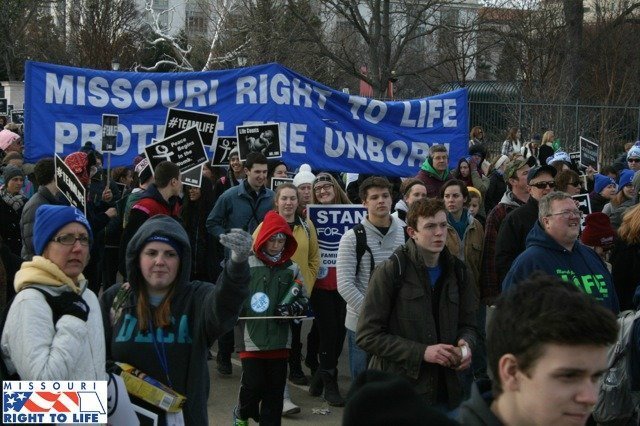 The 45th annual March for Life in Washington DC on January 19 will draw hundreds of thousands of marchers from across the country including thousands of Missourians.  While past marches have included more than 500,00 participants, they are routinely ignored by both the local and national media. We marchers represent all 50 states, all ages and walks of life, and are united in purpose and commitment.

We march because it is our First Amendment right as citizens to freedom of speech, assembly, and the right to petition the government for redress of grievance. We march in Washington because it is from there that the Supreme Court handed down concurrent decisions on January 22, 1973. Roe v. Wade and Doe v. Bolton struck down all existing state laws regarding abortion and unleashed 45 years of abortion-on-demand for the full nine months of pregnancy in all fifty states.

We march because we believe in the words of the Declaration of Independence which acknowledge “self-evident” truths of the “Laws of Nature and of Nature’s God” “that all men are created equal, that they are endowed by their Creator with certain unalienable Rights, that among these are Life, Liberty and the pursuit of Happiness.”  As good citizens, we seek to restore these rights which are being denied to millions of unborn children.

We march to protect women.  According to various studies, many post-abortive women suffer numerous threats to their health including life-threatening complications, depression, Post-Traumatic Stress disorder, a higher death rate from various causes following their abortion and higher suicide rates. Abortion increases a woman’s risk of breast cancer and future miscarriages.

We march because we’re saving lives. National Right to Life reports that there is a long-term trend for fewer abortions.  The number is down significantly from 1990 when the country saw an all-time high of 1.6 million abortions per year.  According to both the Guttmacher Institute, the former research arm of Planned Parenthood, and the Center for Disease Control, abortions have been below one million per year since 2012. In Missouri, the number of abortions has been reduced by close to two-thirds from the high of 21,671 in 1980.  Missouri abortions in 2016 fell to an all-time low of 7,254.

The efforts of the pro-life community to educate people on the truth and consequences of abortion, to provide alternatives to women in crisis pregnancies, to elect candidates who support the right to life of unborn children, and to support legislation that protects women from being victimized by the multi-billion dollar abortion industry is saving lives – millions of them.

We march because we know that each and every human life has intrinsic dignity and value that demands respect and protection.  We know that the degrading of human life inherent in the abortion culture is reflected in the violence seen daily throughout America.

There are 60 million reasons why we march – the number of abortions since Roe and Doe according to reports from the U.S. Centers for Disease Control and the Guttmacher Institute. Sixty million – a number that represents the total combined population of over 18 states.  A number 40 times the total of American war deaths since and including the Civil War.

The March for Life is the longest, largest, consecutive public assembly in the history of the United States.  On this 45th anniversary of the tragic Roe and Doe decisions, we march once again as we will every year until the promise of our founding fathers is restored to all Americans – born and unborn.

We march for many reasons – 60 million of them.